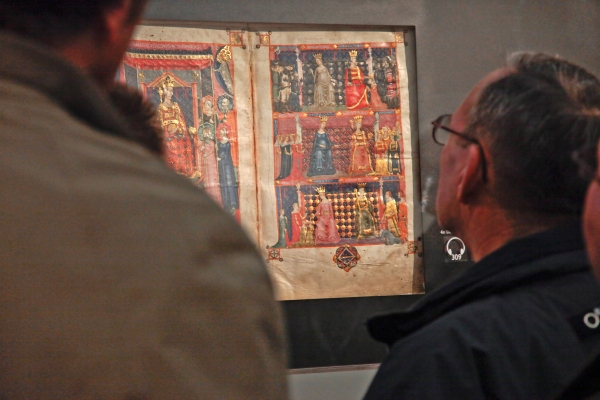 The Anjou Bible – Naples 1340 – a royal manuscript revealed presented the superbly illuminated pages of a little- known manuscript created at the unruly Royal Court of Naples in the turbulent fourteenth century. Power, intrigue, gold, a couple of shadowy figures and several exceptionally talented artists made for an explosive mix.

The precious parchment folios of the Bible, which found its way to Brabant many centuries ago, had been carefully taken apart to give the public a chance to admire them. After the exhibition, this fragile gem was irrevocably re-bound and returned indefinitely to the strong room at Leuven University for safekeeping.

First half of the 14th century. Southern and Central Europe were governed by the successful dynasty of Anjou, which continued to expand its territories and boasted artists like Giotto, Boccaccio and Petrarch. In 1328, after the death of her father, Joanna of Anjou became the official heir to the prosperous house of the kings of Naples and Sicily. Several years later her grandfather, Robert I, gave Joanna and her young Hungarian fiancé Andrew a precious gift. That gift was an exceptionally valuable manuscript which became known as the Anjou Bible.